I was born and grew up in the City of Tofu (Kediri, East Java). Childhood was fun: I got to taste two different worlds:

(1) cycling to the countryside, playing in the mud, flying a kite, etc. The perks of living in the outskirts of town.

and (2) gaming consoles: Nintendo Famicom/NES, SNES, SEGA Genesis, Sony PlayStation 1 & 2. I had SNES, to play other systems I would visit my friends or gaming rental in the weekends. I probably played too much video games, even my grades took a nosedive. Well worth it. 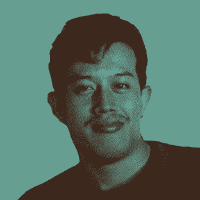 I don’t actually look like this in person, I have a condition called RBF.

Then there’s PC: the ability to not only play video games, but also play VCDs, doing homework, communications, all in the same machine was such a revelation to me. I was exposed to this cool world of gadgetry at just the right time and I thank my parents for that. The first OSes I used were Windows 95 and 98, my friend Fernanda showed me that it’s possible to play PS1 games on PC via emulation, and I abandoned gaming consoles altogether ever since.

At school I was not remarkable, in fact I was an average kid. I had an interest in natural sciences (except for chemistry), but it waned overtime and the only subjects I love was computers. Hated Biology and Chemistry because I’m not good at memorizing. Physics, especially the branch of Optics was cool, but that’s because my dad is a photographer and I get to play with lenses. First exposure to programming was Visual BASIC and Pascal, then I learned how to create a blog, then how to customize the look and feel, HTML, CSS, down the web development rabbit hole I went.

I studied Teknik Informatika (CompSci) at UNP Kediri with Human-Computer Interaction/UX on web authentication as my final year project, it was similar to Google Prompt. I didn’t steal the idea from Google, came up with it from other sources of inspiration. But instead of a mobile app, I built a chatbot that prompts the user to confirm logins.

I am a proud Rubyist. I picked up the language during my sophomore, it was a world of difference, the alternatives were either useless or clunky to work with. I used many things: PHP, Java, C#, Python, etc. Ruby is one of the programming languages built for humans first and machines second (to be fair, performance is now decent), and it literally changed my life and I got my first full-time job thanks to Ruby.

Around the time when I was going to receive my bachelor’s degree, Tarina reached out to me on LinkedIn and shared the SDE job opening at Jurnal. Tarina, if you’re reading this, I owe you a great deal, you changed my life and I thank you for that. I jumped at the opportunity and have never regretted it. This was also the first time I moved out of my parents’ house. Working at Jurnal is a truly humbling experience.

At Jurnal, I get to collaborate with brilliant people and work on a nation-scale production environment. Anita, Daniel, Dede, Eka, Fery, Ivana, Kevin, Paula, Retha, Rotama, Stephen, Yosua, and many more: I’m privileged to work with you! I don’t waste my time there, every opportunity to learn I always take: developing new features, customizing print client, building frontend, performing deployments, joining the bug roster, maintaining the API, the list goes on. I learned so much in such a short period. Two years later, I left Jakarta for Bali for more adventure.

I’m now working as a lead engineer at Melalie x Itsavirus. I am mainly responsible for backend and infra stuff. I built the Melalie API, including the location-based search functionality. This is a good opportunity to get the feels of working on early and scrappy team, building something from the ground up, and that not only includes the technical side of thing. Then everything changed when the pandemic began: we had to do everything and more to keep us afloat: working improbable projects and long hours, and yet here we are now: Team Not Dead. In retrospect, working at Melalie x Itsavirus gave me the opportunity to work internationally across different time zones on cool projects.

I enjoys laying a foundation on which other developers build. I am pragmatically obsessed with automation and generalization, and I tend to look at things holistically (as oppossed to focusing too much on the machine or the human part of the equation). I prefers working on my own but I can also work with other human beings, but I despise meta-works and red tapes. I love being alone but I’m not a sociopath, I won’t ship crappy APIs that will make other developers suffer.

I believe tech can solve many things but not everything should be solved with tech. For instance, I like my rice cooker dumb and not connected to the Internet because it only has one simple job: cook rice, and the laws of physics will suffice. I’m not a luddite, and that would be oxymoronic for a tech worker. Low tech is better than wrong application of tech that doesn’t add value or even make things worse.

Perhaps this is my dozenth attempt at blogging, but I do want to write better, so I mean it this time. Also, The Year of Writing. I will write more articles, tutorials, and list my projects in the future.

I built this blog using Nanoc SSG, I originally stole the HTML and CSS from mojombo but later decided to design myself because I need the pages to be responsive. I use Milligram CSS for the grid layout. Utterances for the clever commenting system. I learned to implement the margin notes from Kenneth Friedman. I added Turbo to make this blog feel snappy. The site is hosted on DigitalOcean App Platform for $0 per month. The code is available on GitHub.